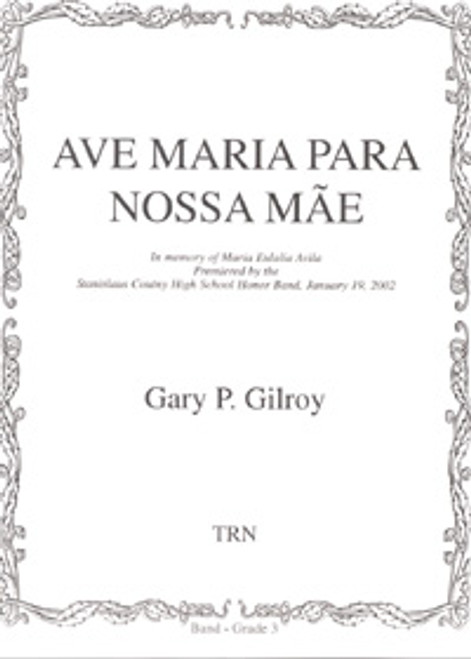 Ave Maria Para Nossa Mãe was composed in memory of Mrs. Maria Eulalia Avila who died on September 28, 2001, in Modesto, California after struggling with a weak heart and cancer the last five years of her life. The title, Ave Maria Para Nossa Mãe is Portuguese for Hail Mary For Our Mother. Mrs. Avila was the mother-in-law of the composer. The work uses a theme borrowed from a musical clock owned by Mrs. Avila. In the many visits to his in-laws home, Gilroy often noted the melody from this clock with interest. It was later, however, that this melody took on a new meaning. The Rosary service for Mrs. Avila was held in St. Stanislaus Catholic Church in Modesto, California. Toward the end of the service, a large group of people from a local Portuguese Society took to the Altar to offer praises for and special memories of Mrs. Avila. They concluded by singing in Portuguese, Ave Maria, the melody from the clock. It now became clear to the composer, why this clock was so special to Mrs. Avila, who led a very religious life. Gilroy decided then that this melody would serve as a catalyst for a composition in memory of his wonderful mother-in-law. The composition initially states the Ave Maria theme in its entirety in the bells and crotales.