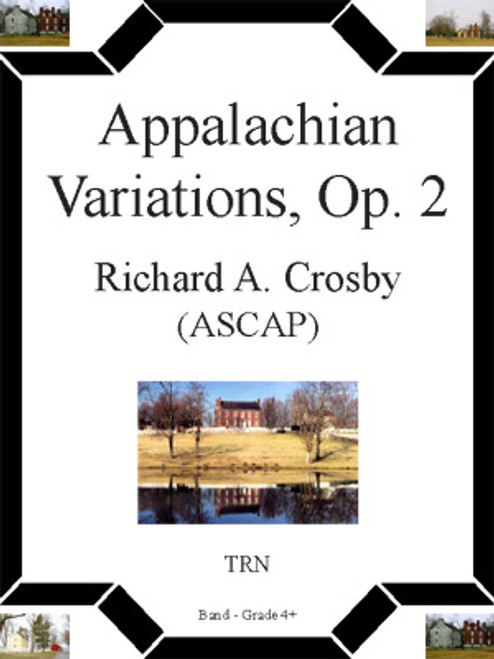 Appalachian Variations was commissioned for the Eastern Kentucky University Centennial Observance by the College of Arts and Sciences, Andrew Schoolmaster, Dean. The theme was inspired by a visit to Shaker Village of Pleasant Hill, just south of Lexington, Kentucky, in October of 2002. During my visit I saw a musical program in the Meeting Hall given by a gentleman in Shaker clothing. This demonstration was so convincing that I felt as though I were truly in the presence of a Shaker demonstrating how he sang and worshipped. I then walked across the way to the main house where the men and women had lived on separate sides, and there was a photographic display of an outdoor excavation where the Shakers had worshipped outside for a time during the early 1800s. The location was referred to as Holy Sinais Plain. The experience had a profound effect on me, and as I left Shaker Village and drove home I had what I can best describe as a moment of illumination, where I saw this same gentleman, caught up in a vision of the city of God singing and dancing to the words, Holy Zion, Holy Zion, power of God awake in my soul! It was just a 4-bar melodic fragment, but I could not get it out of my mind, and for the next 2 & ½ years it haunted me. I did not write it down until early 2005, and added 4 more bars to make a complete 8-bar phrase and provide balance. Here are the complete 8 bars, as I harmonized it: When Dean Schoolmaster made it known that he would like to commission a work to honor EKUs Centennial I immediately knew that I wanted to write work based on this theme. I began sketching variations at the piano in late July, 2005, and completed the rough draft at the end of September. I began scoring the work for symphonic band on October 1st, completing the work over the Thanksgiving holiday. I chose variation form partly out of my great admiration for John Barnes Chance, an outstanding composer who was teaching at the University of Kentucky at the time of his untimely death in 1974 from an electrical accident. Hisfirst major success as a band composer was Variations on a Korean Folksong, and I felt that using the variation format would suit me well. The work begins with an introduction of 8 bars, followed by the harmonized theme stated in the woodwinds. This is followed by 8 variations and a coda. Each variation has a different character; the first is a broken version, similar in overall style to the theme, with the melody in the solo trumpet; the second is a study in contrapuntal motion and rhythm; after a short transition, the third variation features duo clarinet parts, followed by a French Horn solo this section is meant to depict the majestic beauty of rural Kentucky; the fourth is dance-like since the Shakers were allowed very little worldly pleasure, one of their greatest joys was dancing as they worshipped and sang; the fifth is slightly more dissonant and highly energetic, featuring fragments of the theme in the trombones; the sixth is reminiscent of an old-style marching band and like the fourth is very celebratory; the seventh is a solemn processional, featuring the funereal beat of the timpani; a transition follows, building a rhythmic ostinato, where fragments of the theme are stated in various instruments with increasing intensity, leading to the climactic eighth variation with a grandiose restatement of the theme new counterpoint in the woodwinds. The work concludes with a rousing coda. Composing Appalachian Variations was, and remains, a deeply personal experience. As I described the work in progress to Lilian Shulman, a musician who currently works at Shaker Village, I remarked, It is alternately solemn and celebratory. As I listen to what I have already composed and transferred to my computer, I see celebrations, I see solemn funeral processions, and I see the dignity and majesty of rural Kentucky. And above all, I see these marvelous images from our past, pictures out of time, moving as though in slow motion, of a strong, dignified, pure and quiet people.