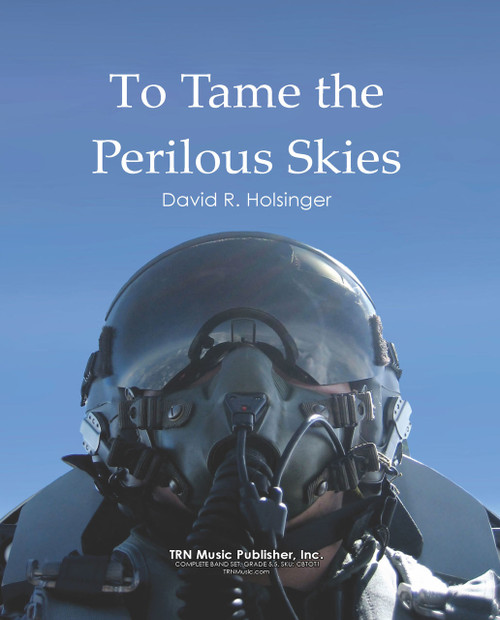 To Tame the Perilous Skies was conceived as a programmatic work literally depicting two opposing forces colliding in battle. The elongated canonic introduction presents a six-pitch intervallic display that is used throughout the composition, both as an intact melodic statement and a fragmented germative device, to depict every extra musical element from serenity to air war to triumphal deliverance. A second melodic element, an imitative fanfare-like motif, first heard in the solo trumpet 120 seconds into the composition, serves repeatedly as counterpoint to all music generated from the opening interval display. To Tame the Perilous Skies, commissioned by the 564th Tactical Air Command Band, Langley AFB, Virginia, received its premiere performance under the baton of Lt. Col. Lowell Graham in the fall of 1990. At the time of its premiere, United Nations forces were assembling in the Persian Gulf, and only a few months later the world watched as modern technological air power "tamed the perilous skies" over Iraq and Kuwait. In retrospect, this work is dedicated not only to the exceptional men and women of the Tactical Air Command, but to the spirit of the modern military aviator, taming perilous skies that all men might live free of oppression.