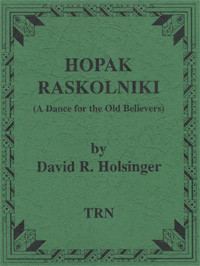 I am genuinely pleased that arrangements were made between C.L. Barnhouse and TRN for the re-release of "Hopak Raskolniki". This was only my second composition for concert band (circa 1980), but its use of layered lines over fluctuating time signatures and the use of metric modulation near the end of the piece was a vast departure from my first publication and a significant leap (at least for me) in establishing what has become my "style" of composition. For those who seek to find great "spiritual dimension" to the title, I'm afraid I shall have to disappoint you . . . The title actually comes from this composer's readings of the life of Russian composer, Nicolas Rimsky-Korsakov. In the 1880's he was instrumental in a movement among Russian composers and musicians to turn from the extreme nationalistic tradition and create a new "style" of music based on broader, more eclectic methods and resources. One account I perused mentioned his artistic struggle with the Council of Old Believers, the "Raskolniki" . . . I was immediately taken with the phrase and this "Russian Dance for the Raskolniki" was born! (I will be quick to admit that my "hopak form" is totally unconventional, completely removed from the original dance form, and used in the title by way of poetic license! This admission hereby excuses my liability to the "closet" Russian Musicology fringe-groups found among band directors far and wide!)