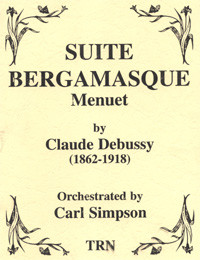 by Claude Debussy, Orchestrated by Carl Simpson. Claude Debussy was born in Saint-German-en-Laye, France in 1862 and died in Paris in 1918. He grew up in a normal bourgeois type family, and he showed no capacity for music until he was ten years old. At eleven, he entered the Paris Conservatory, studying the piano and music theory. He studied with such famous composers as Jules Massenet, Cesar Franck, and Emile Durand. He found the routine work of studying music distasteful, though from time to time he won various prizes and medals for piano, accompaniment, counterpoint and fugue. Finally, at age 22, he won the coveted highest honor for the conservatory, the Grand Prix de Rome. He spent three years studying in Rome but returned to Paris before completing the course work required of the prize. He settled down to a composer's career to which he confined himself for the rest of his life. He was a very retiring person by nature, and never held any official appointments, rarely appeared in public, whether as a conductor or as a pianist, and had very little to do with other musicians. He was influenced by such composers as Mussorgski and Borodin, and briefly by Wagner. His contacts with the Impressionist movement, added to the influence of modern French art and poetry, contributed to Debussy's mature style, in which formal structure becomes less important, while mood, atmosphere, and color assume special significance. He, along with Maurice Ravel, became champions of the French Impressionist music.