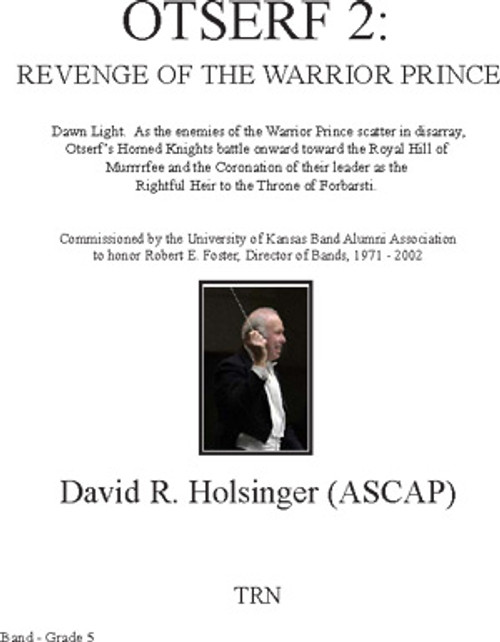 Dawn Light. As the enemies of the Warrior Prince scatter in disarray, Otserf's Horned Knights battle onward toward the Royal Hill of Murrrrfee and the Coronation of their leader as the Rightful Heir to the Throne of Forbarsti. *****

Commissioned by the University of Kansas Band Alumni Association to honor Robert E. Foster, Director of Bands, 1971 - 2002. In 1982, David Holsinger was awarded his first of two Ostwald Prizes for "The Armies of the Omnipresent Otserf," a tongue-in-cheek musical allegory in which the hero, OTSERF, readied his "horned Knights" for the mighty battle against an arch enemy. The plot of the music was based on Monday morning marching band staff meetings at the University of Kansas while the composer was a grad student there.

All in fun, "OTSERF" is, of course, FOSTER, with all the letters rearranged, the "horned knights" referred to the marching band, and the arch enemy was the "other" Kansas university in the then Big Eight Conference. Twenty years later, it only seemed appropriate to resurrect some of those first themes in this triumphant epilogue to celebrate Robert Foster's illustrious career. Not only is he a great BandMaster, but he is also a great Gentleman! Guys like him deserve to be KING! So be it.