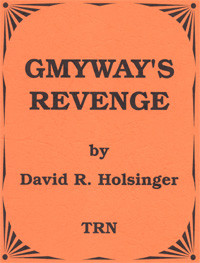 After oh-so-many "heavy" compositions, sometimes a composer just has to "let his hair down" and produce some musical "highjinks" simply to put all things into perspective! Having very little hair to sacrifice, Holsinger takes a bold step into the sublime in writing the Suite for Symphonic Band, GMYWAY'S REVENGE! Under the guise of this nebulous title, lurks three outrageously frantic movements full of fun, vitality, whimsy, and enough fast notes to make even the best of bands breathless! What better way to show off the Greater Milwaukee Youth Wind Ensemble as they celebrate their 10th anniversary under the direction of Tom Dvorak. After a flamboyant and festive "Big-Note" opening, the first movement finds its true character in a slapstick scherzo. The Intermezzo, woven around an undulating halfstep ostinato, links melodic fragments from the first movement and the prominent melody of the third movement. The Suite, closes with a rather robust Presto in a style we associate with the composer; ebullient rhythms, fluctuating accents, poly-lineal textures, and "no-mercy" horn lines!