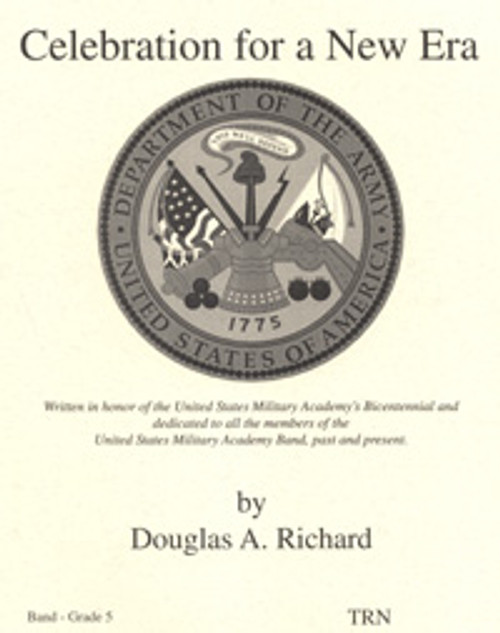 Originally written for the bicentennial celebration of the United States Military Academy at West Point, NY, this composition was premiered at Carnegie Hall by theUnited States Military Academy Band, incorporating The United States Army Band's Herald Trumpets. "Celebration for a New Era" heralds in the new millennium with a work that captures the spirit and essence of West Point's timeless role in the history of our country. It is decidedly pictorial-the sights and sounds reminiscent of those imposing fortress, early morning Reveille, the full detail of bugles, and drums hammering away as the sun rises over the east edge of the Hudson River. Hundreds of cadets pour forth for the dawn of a new day-crisp uniforms, the flash of silver bugles, the swing of the drum-major's mace, and the precision of military drill as the "Long Gray Line" prepares to take on the challenges of leadership in the new era. Richard's treatment of West Point's alma mater symbolizes the spirit of today's academy by conveying how contemporary ideas continue to grow from the foundations of tradition. This is the soldier's life-order, structure and discipline. He has taken these myriad visions and woven them into a musical tapestry that blends the sounds of ceremonial trumpets with the colors of the modern wind band.